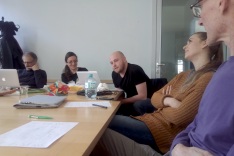 Catalyst: Jessica Foley with the Department of Architectural Theory and Philosophy of Technics at TU Wien.

For two weeks during March 2017, I spent time with the Department of Architectural Theory and Philosophy of Technics (ATTP) at the Technical University of Vienna. The head of the Department, Prof. Vera Buhlmann, had kindly taken up my offer to carry out a Short Term Scientific Mission with her as part of the New Materialisms COST Action Network.

Following the presentation I was invited to host/catalyse an Engineering Fictions session as part of the ATTP’s weekly “Jour Fixe”. This was quite a challenge considering I would effectively have to play host and catalyst at the same time, a notoriously challenging (albeit fun) task!

A couple of things had struck me about the research going on at the ATTP – one was that robots were becoming a feature of their research profile.

The Department had recently become a home to “Pepper“, a humanoid robot they had named “Machina”. There were plans afoot to see how humanoid robots would change human understanding/relationship with architectural space, this was led by Senior Scientist at TU Wien, Oliver Schurer.

Excerpt from my Notebook during time spent with ‘Machina’, March 2017.

The second instance of robot talk I came across was in the work of Selena Savic, a Postdoctoral Researcher working with Vera Buhlmann, who was devising a twitter chat-bot to learn about the debate in architectural discourse about the use of digital technology and software in architectural practices.

But then, in the work of Vera Buhlmann and Ludger Hovestadt, the word Bot is also in use, but this time as an acronym: Bodies of Thought or Body of Thinking. (Hence the title of this session as “A BoT experiment”) This is a very dense concept that I don’t quite have a grasp of yet, but I like the feel of it: “A body of thinkg (BoT) is a cultural constitution indicating how relations between necessity, contingency, and self-reference are being maintained”. [Eigen Architecture: Computability as Literacy, Ludger Hovestadt and Vera Buhlmann (Eds.), Ambra|V, (2013)]

Suffice it to say that about the only coherent “seed” I could bring to the “Jour Fixe” on the 13th March 2017 was the divergent concept of “BoT”. So that’s precisely what I did. It was nerve wracking, because it is a personal risk to open up a conversation with strangers about something one knows little about… but that’s precisely what EF is all about:

The Critical Improvisation of Thought with (sometimes familiar) Strangers.

The seed opened up lots of questions and revealed some tensions at work around the various meanings harboured within the concept of BoT – it was clear that this was conversation that would be worth having again at the ATTP.

I proposed two games that I thought could work for framing some improvisational writing.

A: Write a dialogue using the ELIZA chat bot.

The group chose B (they were sick of conversing with robots it seemed!). The Popcorn exercise was a challenge in and of itself, it took a while to get going, and not only because we were writing in people second language of English. (That is the norm for most EF sessions anyway).

Some interesting sentences emerged, and most people were happy to read their aloud. Here’s one piece of writing from the session:

“Is knowledge always learning, or unlearning too? Society of comparing. How much is the weight of information, on the moon? We space (our) time for our machines. The snow crystal is the singular consequence of the turbulence. To leave and to arrive is part of the ritual. Infinite pages left. You make the individual I am. The reactive components are the most important in sound and philosophy. Is architecture the projection of movements in space? It only appears solid on a certain scale. Is architecture the production of (transcendence) moments in time? Who decides about who is on the outside?”